As a blogger I have had the opportunity to review a number of bibles and bible translations. Yet even as a blogger, opportunities to review bibles are less frequent as they are immediately snatched during the night, by greedy bible hoarders, as soon as they are made available on the blogging sites at a time when most respectable  individuals with jobs and families are still sleeping. So I have lost more opportunities to review bibles.  Nevertheless, the availability of online bibles  makes it very easy to compare translations as well.   As a believer,  I read the bible because it is the word of God.  There are so many translations to choose from- ranging from the traditional and beloved King James to the modern, simplified, paraphrase such as the Message.

Recently  I have had the opportunity to review even more bibles, namely two contrasting translations, a modern faithful translation, the NLT and a more literal NKJV. A frequently used translation by Thomas Nelson publishers, one of the publishers I blog for, is the NKJV- New King James Version, which is often used for their themed bibles.  The NKJV as well as other more literal translations- such as the NASB, NRSV and ESV tend to be overly literal to the point of being difficult to understand for many of today's readers. This is especially evident in the Psalms, and other old testament books as well as the letters in the New Testament.  At times, especially for new bible readers, this can prove to be a impediment to truly understanding God's word.  This is not a problem for seminary students of course, and proves to be useful for serious theological study.  Yet for a new reader to the bible, and to the modern readers of this generation, this is an impediment to understanding God's word.

For example, a bible marketed for new belivers titled the "New Believers Bible- Start" ironically, is available in only the literal NKJV, rather than a more user friendly version such as the NCV also by the same publisher. The NCV which also is available by the same publisher but under- marketed, would be more appropriate for a new believer or new bible reader.  Furthermore, the  Max Lucado and Jesus Calling themed devotional bibles are also available in NKJV only and not the more modern yet reliable NCV- New Century Version.  For those readers who enjoy Lucado's simple to understand books, the NKJV does a disservice- and a more user friendly version for this themed bible would be more appropriate.

In response to the newer translations being published, there is a growing outrage among scholars and KJV loyalists.  A number of emerging church leaders and rigid individuals claim that the ESV English Standard Version,  in particular, is the 'Bible of the future'—ideal for public worship and private reading, appropriate for readers including adults, teens and  children. This puzzles me, since the ESV seems to me to be very  literal and full of archaisms, awkward language, obscure idioms, irregular word order, and a great deal of “Biblish.” Biblish is best defined as when the translator tries to reproduce the form of the Greek or Hebrew without  consideration for how people actually write or speak in the real world. The ESV, like other formal literal versions (RSV, NASB,  NKJV,  NRSV) is a good for indepth theological study for scholars,   yet chock full of biblish, and therefore  is not the best choice as a standard Bible for a church that is supposed to serve a broad representation of people. The sentence structure and word choice of these very literal translations  greatly obscures the meaning of God's word for most readers.

The more literal translations are accurate and trustworthy (the KJV not as much so as it which was written before more ancient manuscripts were discovered), and are great for theologens and scholars and seminary students- in contrast to  a paraphrase such  the Message which is far, far less literal -to the point of being comedic. As far as a  translations for those who aren't theologens,  there are   more appropriate and more readable choices available between in the mid point of the translation spectrum.   I feel pride  and elitism is an issue, and that there are some individuals in church and elsewhere who simply feel smarter and more intelligent when they carry around a NKJV, KJV or ESV.  This is nothing more than biblical snobbery or elitism.  There are many who feel the NIV, the HCSB, CSB, NLT and other more readable such translations are beneath them. Other readers might be skeptical of the reliability of some of the more modern translations. Personally, I used to feel that way until I started  comparing the texts of passages from different versions side by side and saw for myself that modern translations do not obscure or change the meaning.  In contrast, the modern translations are enlightening.  There is one exception- The Message bible is too paraphrased, intended for casual reading and not serious study.  It is however a unique paraphrase that is a good choice, however for teenaged readers. As a blogger I have had the opportunity to review more translations.  At this point I favor the NLT as it  combines the best of readability and truthfulness to the original intent of the bible's meaning.

As far as bible translations, there is a spectrum of the ease of reading of a particular translation ranging from beginner/ easy reading levels such as the message and more complex/ literal such as the King James version, and revised standard version. For example, the popular NIV- New International Version by Zondervan, and NLT New Living Translation by Tyndale are somewhere in the middle with regard to ease of reading level and undertsanding. The NKJV - New King James Version, in particular, is a bit more literal and is written in somewhat of a higher reading level. Nevertheless, this NKJV is still more readable than the ESV or KJV. For those new to the bible entirely, The NLT bible as well as NIV are examples of versions are easy to read and understand, and are very good options for those who seek to understand the meaning of the bible.

Difficult to read versions such as the Old King James - though very well written and poetic- in a Shakespearian sort of way, do a disservice to the modern or new bible reader. The antique language is difficult for many in this day to understand on their own and makes it prohibitive for many to understand the truths of the bible. Having known many readers of the KJV, who do not even understand the meaning of what they read- indicates that this is not the best translation for those who really seek to know God's word. What is the point of a bible after all if you can not even undertsand it? For those new to the bible or for those who have a difficult to read translation such as the King James Version, who wish to read the bible and actually understand it, I would suggest one of the bible versions with more modern & contemporary language. While the NKJV is relatively easy to read, it may present a challange to many modern adults- especially when trying to decipher the meaning of the New Testament letters or the Psalms.

What a treasure of information is obscured in these difficult to decipher translations! Readers struggle to read and understand, but the difficult awkward language is a stumbling block.  What really seems ironic is when the NKJV, ESV or KJV is printed as a children's bible! Imagine how many kids get those "Precious Moments" themed bibles.  They look cute with the pink or pale blue cover and the cartoon of a praying child.  Yet when you open it, it seems so unfriendly for a young reader with its microscopic text and hard to read KJV text.  When I see this, I can only wonder what child on his or her own can actually read and get anything from it. This is a great diservice to a child- when a child is presented with a bible in archaic English in a tiny text font. It is as if the word of God is locked away or closed off - inaccessible.  I feel that publishers and even parents need to take time to consider what a child, young reader or teenager will understand when being presented with the bible.  There are a large number of very good youth bibles and study bibles full of colorful graphics such as the NLT themed study bibles, and magazine style bibles in the NCV version which are sure to appeal to younger readers and new bible readers.  The NIV and HCSB also have a number study and student bibles too.

This brief survey is in no way complete.  I simply touched upon the many translations available.  Just about every household has a bible that simply collects dust on the bookshelf.  I can imagine most of these dusty unread volumes are the KJV, New Revised Standard or some other antiquated translation.  Once again, what is the point of having a bible if it never is read? What is the point of clinging tight to one's loyalty to the King James Version if you can't even read or understand it.  Other than Christmas time, when sentimental readers long to read the Christmas passage about the birth of Jesus in vintage King James style , I doubt that any other KJV passage is as well read. 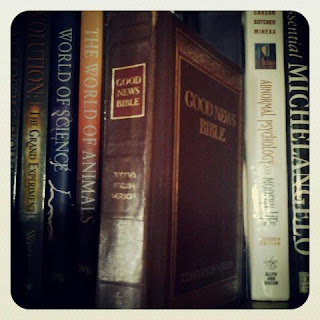 The bible pictured above- The Good News Bible was my very first bible, an easy to read bible, in an easy to read font.........for the story of how important easy to read translations are, please read  The Day That Got Away

Posted by The LemonBee book and Blog at 7:11 AM