Doctor Who The Drosten's Curse by A.L. Kennedy 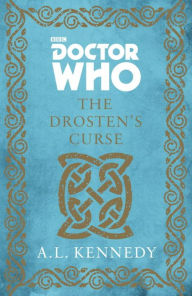 Doctor Who The Drosten's Curse by A.L. Kennedy is the newest novel based on  the well known Doctor Who series. Fans of the series will love this newest book.  A.L. Kennedy's writing style qualifies as literary fiction delving deeply into a well developed plot and three dimensional characters. The intensity of this writing is more than what a reader might expect from a serial book based on a popular television program. "The Doctor was used to all the weird surprises, odd transmat beams and, for that matter, harsh treatment that a universe- one that didn't wish to be rude, but one did have to mention- a universe filled with some highly unpleasant characters could serve up." (Kennedy, 2015 p. 158)

Doctor Who is a popular TV series originally produced in 1963 and has since earned a place in pop culture. Who hasn't heard of the infamous traveling "Tardis"? Anyone familiar with popular media would recognize the "Public call box" as it  travels in space.  TThe different books in this series are written by different authors- each with their own unique style and twist.


The fast paced narrative jumps grabs the reader at the first paragraph.  His action packed dialogue will keep the attention of all readers as well as his in-depth probing of the individual characters and their thoughts will keep the reader glued to the page for this new adventure. There is satire and humor woven through- as well as plot twists that fans have grown to love.  Fans of the popular TV series will enjoy the common themes of the television show, within this book.  Readers who enjoy  mystery and science fiction fans alike, will also enjoy this book. There is enough authentic graphic scientific description to hold the attention of true Sci fi fans.  The authentic historic elements of traveling back into time will be appreciated by history enthusiasts.  The story is eccentric and combines a number of unusual happenings and events. There are a number of allusions and references that might be missed if the reader isn't paying careful attention. There is some deciphering involved- and a learning curve if you are not familiar with the series.  But even unfamiliar readers will enjoy this book.  If you need a break from the everyday commonplace world of fiction- this is a great choice. This is a well rounded story with a variety of elements. While the TV series is equally enjoyed by adults as well as teens and children alike, this novel  an appropriate book choice for teens as well as adults.

As a blogger I received a copy of this book published by Broadway books an imprint of Crown Publishing Group, for the purpose of writing this review.
Posted by The LemonBee book and Blog at 10:06 AM