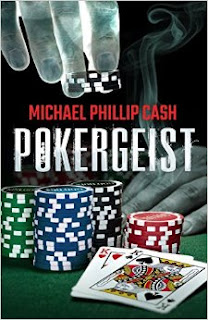 Pokergeist is the newest novel by Michael Phillip Cash.  This fast paced novel combines the paranormal with the Las Vegas casino nightlife.  In this original work, the reader is introduced to a timid man of low self worth named Telly, unemployed  and living out of a cheap motel, quickly losing hope as he makes one last effort to pursue a far fetched dream of winning a poker tournament before resigning himself to a life of disappointment.  Ironically he isn't alone in his quest as he makes an unlikely acquaintance with a dead poker player, once a professional who wanders in a limbo state unable to accept the loss of his final tournament.  Together they form an unlikely bond, complimenting each others' weakness in one final attempt in the pursuit of their dream, and more importantly, spiritual and emotional redemption.

Not simply a ghost story, the characters have real depth- as if Cash has the ability to psychologically analyze the the three dimensional characters he creates.  Telly is in his thirties, lamenting his lost career and lifestyle, a victim of corporate downsizing, he now lives on the brink of poverty. Despite his Masters degree, he must endure the ongoing humiliation of job rejections as he contemplates taking a minimum wage job as a cab driver. He is torn between his pride and his duty to care for his wife who has become the sole breadwinner. Meanwhile, the spirit of Clutch, a hardened and weary soul, is racked with guilt as he powerlessly observes the aftermath of his poor choices on his family as well as his teen-aged daughter and his grieving mistress. He is impotent to protect his family from the unsavory loan sharks he owed money to as his estate is tied up in probate because he did not write a will.  He wonders aimlessly as he watches from the sidelines- until a quirk in the spiritual- space time continuum allows his path to cross with Telly.  This story will leave any reader glued to its pages, rooting for redemption.  In a plot twist, the end is ironic, and unexpected, yet the careful and astute reader might find some clues threaded throughout the novel.  There is more than meets the eye with this complex novel.  Although fast paced with lively dialogue, it is thought provoking as well.  In fact it may even leave the reader to contemplate his or her own life and priorities as well.  Philosophical truth is found in the unlikeliest of places and circumstances.  A lesson from an unlikely ghost from Clutch's own past reveals an important lesson, "Poker is life.  The hand you're dealt is determined.  It's how you play the cards that counts." (Cash, 2015, p. 232) As a blogger I received a copy of this book for the purpose of writing this review. This book is available on Amazon.com and Barnes & Noble.
Posted by The LemonBee book and Blog at 7:09 PM