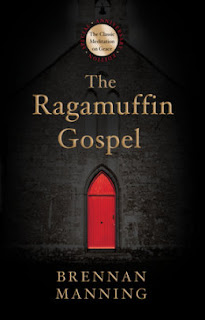 As other contemporary readers, I too have heard of The Ragamuffin Gospel by Brennan Manning, often referred to as "the Classic Meditation on Grace".  I've never actually read it until now with the reprint of this Special Anniversary Edition.  Unbelievably I met Brennan Manning's niece in the most unlikely of places- after I started a new job in a sub acute facility as a new RN. Who would have even imagined that I'd befriend a relative of The beloved and well respected contemporary Christian author, Brennan Manning's niece.  And she turned out to be everything you would expect from the legacy of Brennan Manning.  She was full of stories and anecdotes about her youth, her family and her Uncle.

Brennan Manning, an ex- Franciscan priest,  challenged much of the hypocrisy and legalism of mainstream churches.  He rejected the strict legalism  and man-made tradition of the Catholic church much like Jesus rejected the hypocrisy and legalism of the Pharisees and other religious leaders.   Manning's message is the perfect outreach for those rejected by rigid, mainstream  religions built on tradition and man made rules rather than the inspiration of God.  For example, Manning uses the example of how the Catholic church will prohibit a divorced woman who remarried from receiving communion.  In contrast, he points to the New Testament where Jesus would reach out to sinners.  In fact, just as in bible times during Jesus' ministry, those labeled as "sinners", and "unclean" were the first to repent and receive the Good News.  On the other hand, the "pious" and hypocrites were to rigid in their practices that they neglected the concepts of mercy and grace.
This book is for anyone who feels rejected by mainstream religion as well as those prideful individuals who feel they are "too good" to associate with those they feel don't meet their criteria of piety.  Manning has an important message and his book is the perfect outreach to draw in countless people to the Good News of the true gospel message.  As a blogger I received a copy of this book published by Multnomah publishers for the purpose of writing this review.


Posted by The LemonBee book and Blog at 5:37 AM