It was an ordinary dreary day that started out with the usual routine: getting ready for work on a cloudy Saturday. I received a call, enroute to the office, that my shift had to be cancelled. The minimal explanation that was offered (my partner had called out sick) was insufficient to my satisfaction. No details were provided as to the specific illness and its start nor its duration- all of which helped to feed into my skepticism as to whether the individual was actually ill. No matter how I persuaded, evet to volunteer my services, they insisted they had no use for me that day, and dejectedly, there was nothing more that I could do but turn around and go home. Reluctantly, I changed course, did a u-turn and headed in the direction of home.


As I was driving home, on that overcast cold winter morning, I noticed the old, run down church next to the cemetery that I pass every day on the way to work. That small, scenic, picturesque cobblestone church, with its pointed steeple topped by a simple white cross, and the small cemetery, by its side- a garden of decaying and cracked grey stones, intertwined with weeds and vines- stood in stark contrast to the rest of the surroundings of main street. The old church seemed as if it were plucked out of a previous long gone era and dropped right into the midst of old, run down, 21st century down town architecture. The only thing that separated the church from the nearby liquor stores, Chinese take-out, diners, convenience stores and used car lots, was an antique, four foot, black iron spiked fence that encircled the church and the graveyard. I always slowed down to look at cemeteries. No matter how many times I drove by this old church, it never failed to intrigue me, and as my usual custom, that morning was no exception so I slowed down. 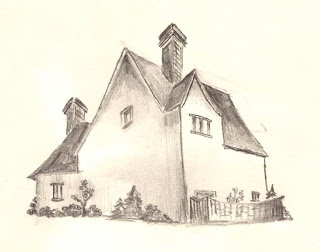 This time I saw some activity going on- reminiscent of a small carnival or flea market, perhaps. My curiosity got the better of me and I actually stopped and pulled into the empty parking lot next to the church to take a better look at what was going on. Perhaps I can find some good books, I thought to myself. I was always interested in books, in particular, I enjoyed literature classics and old textbooks- which were usually plentiful at garage sales and flea markets. I saw people hoisting cumbersome, heavy, oblong boxes through the narrow doorway of the church. I wondered what was in those curious looking boxes and my greed for some books drew me closer. Slowly, I opened my car door, slid out of the driver’s seat, and shut the door behind me.

As I stood outside my car, I could see there was actually a small line of people waiting to enter the church through its narrow doors. There were perhaps two or three to an oblong box. Perhaps this was a church fundraiser, and these strange folk were setting up early for a flea market. I always thought that the vendors at flea markets were weird and uncouth individuals considering the eclectic assortment of used junk they would frequently try to pawn off. For what other opinion could I form of someone who would try and sell half used containers of deodorant, along side unopened McDonald’s happy meal toys, leather belts and old VHS tapes. Either their motives were unethical, or they truly were deluded into believing that there was value in their junk. In most cases the trash would be a more appropriate place to unload their overpriced junk. Perhaps these vendors had come with the high hopes of unloading their garages and attics in an attempt to raise money for some sort of noble endeavor or humanitarian cause. Not everyone had boxes, nevertheless, some were trudging through the narrow doorway with what appeared to be long narrow laundry bags or sleeping bags filled with something- perhaps clothing. Others had hoisted large overflowing dusty cardboard boxes of various goods and trinkets. It was like a gypsy caravan. Finally I made my way to the front door of the church. With all the activity, no one noticed my presence, thankfully I could observe in peace and anonymity.

It was if my eyes were deceiving me, I saw something which made me question as if this were real or that perhaps it was a dream! The oblong boxes were coffins, and the coffins were open. The coffins were not the traditional coffins that you see in a modern funeral service- those would have been too heavy to lift with two people anyway. These “coffins”- for I could not find a better expression to describe these ghastly containers- were constructed of relatively light weight materials: wood, tin and cardboard. They looked like oversized shoe boxes without lids. These makeshift coffins were easily be carried by two pall bearers, with one at either end. The overstuffed sleeping bags and laundry bags were actually the dead, encased in blankets and grungy bedding- some of which were in various stages of decay! Some of the elderly, grey haired woman, perhaps because they lacked the vigor and strength of their youth, simply dragged their bodies into the church. I was repulsed yet drawn at the same time. I stood transfixed in the doorway, unable to move- unable to enter the church threshold, yet unable to leave. I felt compelled to stay yet overcome with a sickly fear that I felt growing inside of being so close to the dead.

Inside the small one-roomed church was a bustle of activity. The surreal atmosphere was a cross between the somber dark gloominess of a funeral home with the fast paced zeal of a flea market and I am sure that there were a small number of health code as well as fire code violations to boot. At least there was one consolation- they weren’t serving any food- that would be too gross. There were guests of all ages crammed into the room- like a typical crowd at a flea market or carnival, I suppose. Along the walls and corners, the vendors were setting up their creepy wares. Specifically, the containers holding the corpses were being propped upright, leaning against the wall for support in strategic locations within the empty church. Apparently all the pews and chairs had been removed from the interior to accommodate this event and the crowds it would draw in. A few plastic fold-up tables were set up- filled with various old books, jewelry, photographs and other trinkets, near each of the displayed propped up bodies. Apparently, the items were set up and displayed with their respective owners that had owned them in life. I wondered if this made the items more valuable. In one corner, I looked with revulsion and shock as I saw two elderly women, casually applying blush and lipstick to the cheeks and lips of a deceased woman propped upright in a wooden box against the wall. Apparently they were cosmetizing the corpse.

Strangely I recognized some people in the crowd from years ago, yet did not acknowledge their presence. Nor did anyone acknowledge mine. They were complete strangers, yet familiar at the same time. Perhaps it was only my imagination, but this room was filled with many faces that were vaguely familiar from my past. Though decades had passed since I had last seen them, miraculously they had not aged whatsoever- still retaining their youth.

But then a strange blind, old man from across the crowded room caught my eye. He seemed familiar yet I did not know who he was. His eyes, appeared to be sealed shut as if the wrinkled, deflated eye lids, were devoid of the usual round orbs. He did not open his eyes, yet he seemed to be able to navigate around the room with ease- and with no need of a walking stick. He knew I was there staring at him from across the room and he casually walked closer. Once we exchanged greeting formalities, he gestured for me to come closer, and I was strangely compelled to obey. As if he were reading my mind he stood directly in front of me positioned his face only inches from my own and I stared straight into his eyes, literally. I could see an opening- as narrow as the width of a thin sheet of paper, between his eyelids. I looked directly into the void as if peering through a keyhole, and saw an unexplainable site. It was as if I had a panoramic 360 degree view inside his skull. I saw what seemed to be an empty expanse of vast darkness. Above, near the top I saw a set of eyes and below I saw a set of two eyes. Four fully formed orbs- fully functioning eyeballs, concealed and recessed deep within the darkness of skull, concealed from view. I could not comprehend what I was seeing. There were two normal eyes on top and two beneath- round white orbs, albeit a bit bloodshot, blue in color with black pupils- normal and functioning in every way, providing the man with perfect 20/20 vision. This was how he could see- so even though he appeared to be blind, he concealed an ingenious method of vision. He turned to the side and I saw above his ear, a gaping hole. The edges had been stitched long ago, and reflected many years of healing and scar tissue. There was no redness and no blood present whatsoever. There was no bandaging applied to cover the wound either- it was just there out in the open. Yet within the two inch ragged hole, the emptiness within his skull was entirely visible. Essentially his head, or to be more accurate, its - head and face was simply an outer shell, and there were none of the usual organs visible within. Medically, the man’s condition was incompatible with life, and in I fact did not know how he was alive. 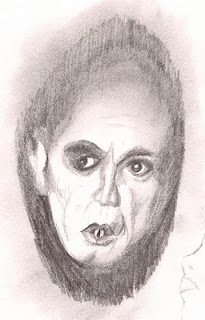 The next thing I remember is a stern, small voice coming in through the doorway, “Mommy I need my clothes for school!”, called Rose as she swung open the door and stood at the foot of the bed. I woke up instantly.
Posted by The LemonBee book and Blog at 12:56 PM