The Universite-ity by Michael Samuels 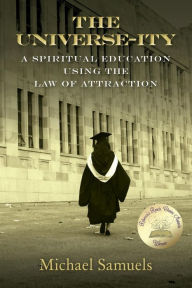 Having my own useless Bachelors degree from a respected university, I attest to truth found in eye opening book, The Universe-ity and in  Michael's Samuels' poignant words, "A standard education doesn't mean you will have an abundant life". (Samuels, 2013) Samuels' words reached out to me, as we both had similar backgrounds- university degrees with no meaningful utility in achieving any goal whatsoever.  This is a book for anyone who seeks more out of life; for those who are enlightened enough to know that success does not come from only a career or a degree and that there is a supernatural or spiritual component to success and happiness.

In the context of the "universe-ity", Samuels  builds on the concepts of Rhonda  Byrne's, The Secret- a unique self help phenomena that integrates science and spirituality with the supernatural in order to help people attain their goals. He demonstrates that success and satisfaction is not lined to education or intelligence or even money.  He explains that "unsuccessful people .... have been broken in by society to live in a box.  They associate having a successful life with tremendous physical or mental exertion. " (Samuels, 2013) He goes on to share with the reader,  the "secret" behind achieving happiness.  As the reader, I had the distinct feeling that Michale Samuels was speaking to me personally.  he has a lively and charismatic writing style that makes it seem as if he is personally speaking to you one on one.  Although Samuels' book is a self help guide, it is like having a personal session with an inspirational speaker.   This is more than an introductory manual that brings the reader to the basic principles  to achieving real happiness and success.  This book is like a continuing education course in strengthening one's morals and achieving personal success in life.

The author integrates the concepts of Karma in providing a backdrop for the principles behind the inner-workings of the universe.  The idea of Karma serves as a spiritual law for Samuels.  This principal is used to explain the universal moral code.  The "Universe" is analogous to a deity in a sense and the idea of Karma becomes a theology or spiritual code.  The spiritual element of this book makes it more complex and more substantial than a traditional self help book- and serves to fulfill the human need to reach for something greater than one's self.  Using modern analogies and anecdotes to reach today's generation,  the author compare the "Universe-ity" to a large supercomputer to which all people are interconnected.  This modern idea of the supercomputer is intertwined with the ancient spiritual concept of Karma in delivering a theory of the behind the scenes mysteries on  how the world really works.

There are those readers who will have difficulty reconciling Samuels' ideas with their religious beliefs.  Michael Samuels' position is that he does not seek to discredit any religion, although some readers, nevertheless, will certainly hold fast to the belief that he contradicts established religious beliefs. For those readers who embraced "The Secret" by Rhonda Byrne and the Law of Attraction, this is a great resource to expand one's learning.  For anyone unfamiliar with the Law of Attraction, this book is an eyeopener to a new thought process and a new way of seeing the world. This book is simply written and easy to digest for any reader. For some readers this book will prove to be life changing.
Posted by The LemonBee book and Blog at 6:02 PM